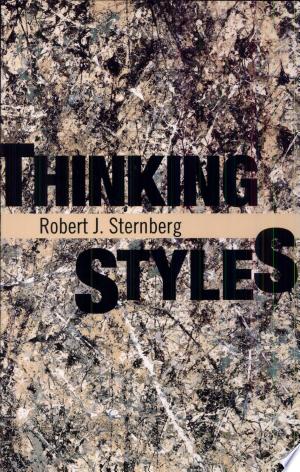 In our society, the recognition of talent depends largely on idealized and entrenched perceptions of academic achievement and job performance. In Thinking Styles, psychologist Robert Sternberg argues that ability often goes unappreciated and uncultivated not because of lack of talent, but because of conflicting styles of thinking and learning. Using a variety of examples that range from scientific studies to personal anecdotes, Dr. Sternberg presents a theory of thinking styles that aims to explain why aptitude tests, school grades, and classroom performance often fail to identify real ability. He believes that criteria for intelligence in both school and the workplace are unfortunately based on the ability to conform rather than to learn. He takes this theory a step farther by stating that "achievement" can be a result of the compatability of personal and institutional thinking styles, and "failure" is too often a result of a conflict of thinking styles, rather than a lack of intelligence or aptitude. Dr. Sternberg presents his revolutionary ideas in a way that is accessible to any educated reader. This provocative book suggests a real change in how we measure achievement and will inspire educators, employers, and parents alike.