I have performed with the Boston Pops on three occasions. First in December 2015 I was the Spirit of Christmas Present. I flew onto the Jorgensen stage at UConn and recited "A Visit From St. Nicholas".

The idea came about to create an Arthur Fiedler puppet in the spring of 2016. Sarah Nolen built and designed the Fiedler puppet. I was enlisted to create the voice and performance for Fiedler. The PBS documentary made about Fiedler in 1976 was my main source of research and inspiration into channeling him.

The UConn Puppet Arts Program was invited to create a show and perform at Symphony Hall with the Boston Pops. The Fiedler puppet narrated "Peter and the Wolf" in May 2016. I was asked to come back again for the UConn Christmas show to perform with the Boston Pops in December 2016. This time Fiedler narrated "A Visit from St. Nicholas". 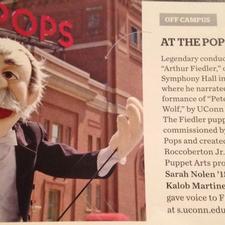 From the UConn Alumni magazine. 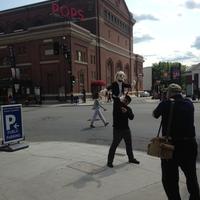 Publicity photos taken by Ken Best outside of Symphony Hall in Boston May 2016. 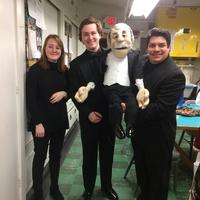 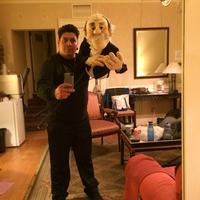 A pre-show selfie at Symphony Hall May 2016. 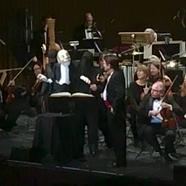 Fiedler on the Jorgensen stage at UConn with Boston Pops conductor, Keith Lockhart.

Arthur Fiedler narrates 'Peter and the Wolf' at Symphony Hall.