Kalob Martinez is an actor who combined his professional interests in stage combat and voice acting and found puppetry. His solo show, “El Beto”, stands as the culmination of his theatrical endeavors in puppet arts, and in 2019 he received a Jim Henson Foundation grant for this show. He is currently an associate artist and ensemble member of Sandglass Theater’s, “Babylon: Journeys of Refugees”, and plays the Hippo in Sandglass' virtual production for young audiences of "Rock the Boat". He voiced and served as the puppeteer for Arthur Fiedler twice with the Boston Pops as narrator for “Peter and the Wolf” and “A Visit from St. Nick”. He is currently a Company Artist for the Classical Theatre Company (CTC) in Houston,TX, and for five seasons (2008-2013) he was an Associate Artist. In 2020 his work for CTC’s “Peer Gynt” was awarded Best Use of Puppetry by the Houston Press Theatre Awards. He has performed as the mascot, Buster Brackets and Fantasy Frank,  for the "Tournament Marathon Challenge" (2017-2019) and the "Fantasy Football Marathon" (2018) both on ESPN. He also assisted in the puppet build for "The Fantasy Show" hosted by fantasy football analyst, Matt Berry, on ESPN Plus. Martinez is also a seasoned voice over actor for the English versions of Anime, the most popular titles include, “No 6”, “The Place Promised in Our Early Days”, “Halo Legends”, “Bodacious Space Pirates”, and “Starship Troopers: Invasion”. 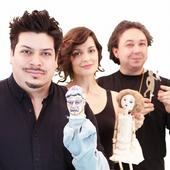 Promotional photo from the MFA Puppet Arts Mini Festival at the Connecticut Repertory Theater with Ana Craciun-Lambrusco and Gavin Cummins. 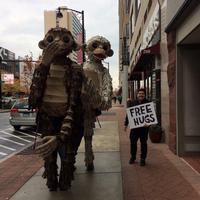 Anne Cubberly's Monkey puppets from Nightfall. The day after the election Novemebr 2016 we gave out free hugs in downtown Hartford. 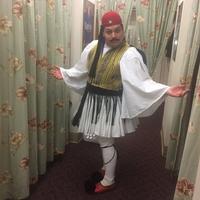 Clowning around in the dressing room in my Officer costume. Comedy of Errors presented at Hartford Stage and directed by Darko Tresmjak. Costume design by Fabio Toblini. 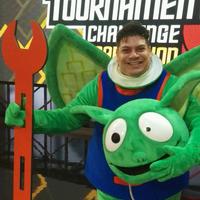 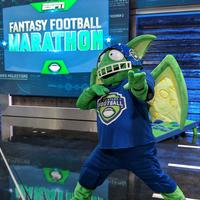 Frank Fantasy on the Fantasy Football Marathon on ESPN in August 2017.

Puppets for ESPN’s "The Fantasy Show" hosted by Matt Berry